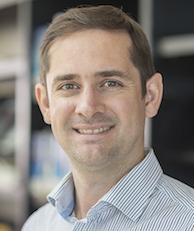 My research concerns theoretical condensed matter physics and in particular quantum transport in heterostructures. I develop theoretical models to explore novel ways to control magnetic order parameters and spin degree of freedom by electrical, thermal and optical means. The rational behind this approach is to address fundamental problems of condensed matter (the nature of spin-orbit coupled transport in ultrathin magnetic heterostructures, the orbital physics behind Dzyaloshinskii-Moriya interaction etc.), and propose innovative mechanisms that can be exploited in disruptive spintronic devices.

Spintronics aims at marrying the science of spin, the fundamental rotational degree of freedom of the electron, with microelectronics technology. Whereas most of the commercial microelectronics available is based on the charge of the carrier (electron or hole), the objective of spintronics is to rely on the spin of the carrier to generate low-energy consumption functional devices.

This requires a profound understanding of condensed matter physics phenomena such as spin relaxation, decoherence and dynamics in complex magnetic structures. Our group focuses on a number of topics related to spin transport in hybrid devices, including spin transfer torque, spin-orbit coupled transport and torques, topological materials and ultrafast magnetization dynamics.

In order to explore new materials and discover novel physical phenomena, we use a variety of theoretical and computational tools, ranging from phenomenological approaches to realistic modeling, such as:

Antiferromagnetic materials could represent the future of spintronic applications thanks to the numerous interesting features they combine: they are robust against perturbation due to magnetic fields, produce no stray fields, display ultrafast THz dynamics, and are capable of generating large magneto-transport effects. Our research aims at understanding spin transport and magnetization dynamics in various classes of materials presenting antiferromagnetic order and explore their ability for electric manipulation and data storage.​​​​​​​​​​​​​

Topological materials are a revolutionary class of systems displaying fascinating properties such as topologically protected, spin-momentum locked surface states combined with insulating bulk, or even Weyl-type energy dispersion. As such, they do not only offer room temperature, lab-accessible test bench for the realization of particle physics ideas, but they also present outstanding opportunities for spintronics applications. Our goal is to scrutinize these various systems to exploit their spin-orbitronics capabilities and uncover novel exciting phenomena. And if, during this charming trip, we encounter effective black holes and strange quasiparticles, it’s even more fun!​​​​​​​​​

Chiral objects are ubiquitous in science and pose fundamental challenges, such as the importance of chiral molecules in commercial drugs or the dominance of matter over antimatter in the universe. Magnetic materials lacking inversion symmetry, called chiral magnets, constitute a unique platform for the exploration and control of chiral objects. Our objective here is to understand magnetization dynamics in chiral magnets and propose routes for improving these properties, always keeping in mind experimental realization and potential technological interest.

Spin-orbit coupling is central to magnetism and spintronics, where it drives magnetic anisotropy, spin relaxation, magnetic damping, anisotropic magnetoresistance and anomalous Hall effect. Quite surprisingly, in spite of its already long history, this fundamental interaction has been pivotal to several revolutions in the past ten years. As a matter of fact, all the effects mentioned above exist in systems where inversion symmetry is preserved. But when inversion symmetry is broken, such as in certain classes of magnetic crystals or at interfaces, spin-orbit coupling triggers a number of fascinating phenomena such as antisymmetric magnetic exchange giving rise to topologically non-trivial magnetic textures, spin-momentum locking, spin-orbit torques, chiral magnetic damping etc. This broad area of research is called spin-orbitronics.

2007-2009       Postdoctoral Fellow, Department of Physics and Astronomy, University of Missouri-Columbia and University of Arizona-Tucson, USA

A symmetrized decomposition of the Kubo-Bastin formula

Spin transport in multilayer graphene away from the charge neutrality point