Red coral from the Mediterranean has been used for jewellery making for thousands of years. Since the 19th century, other valuable corals have been exploited in the Pacific. Due to the high levels of harvesting and the risks to populations, some countries have had Pacific species listed in Appendix 3 of CITES (Convention on International Trade in Endangered Species of Wild fauna and flora). This is the case for Corallium japonicum. The CITES listing imposes strict international trade rules, while other species (such as Mediterranean red coral) are free to move. However, regulatory institutions do not have a reliable means of identifying valuable corals to separate free-ranging species from those that are subject to CITES rules. Determination of the chemical composition of the skeletons of C. rubrum and C. japonicum by LA-ICP-MS reveals differences in barium and lead concentration between the two species.  The statistical study of the data indicates that the differences are sufficient to identify with a high degree of confidence these two species. The method was applied blindly on cabochons already worked in jewellery, and proved to be conclusive. Moreover, we demonstrate the low destructive nature of the analysis method (crater of 40 µm diameter, invisible to the naked eye). We therefore have a non-destructive method for the identification of valuable corals, both CITES and non-CITES. Our study allows us to conclude that the variability of certain elements, such as Ca, S, Mg, Na, is mainly linked to variations in growth rate, while differences in the composition of sea water (Mediterranean vs. Pacific) would be at the origin of the differences in concentration of Ba and Pb between C. rubrum and C. japonicum, the Mediterranean having higher concentrations of these elements than the Pacific. 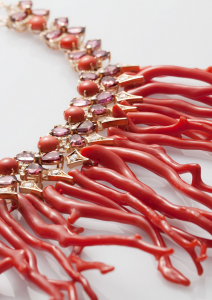 Image caption : Necklace made in 2017 by the Chantecler Society of Naples, Italy, and comprising 54 branches and 18 cabochons of Mediterranean red coral. Photo Chantecler (Naples, Italy).